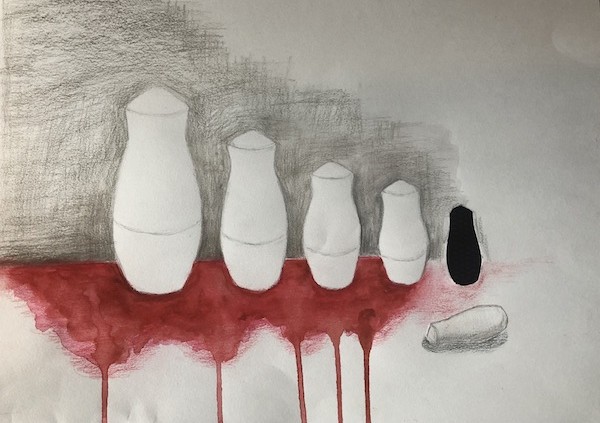 All images property of https://www.rainacowanarttherapist.com/

Mother’s Day 2019 is fast approaching and the birth of the latest royal baby in Britain is all over the news. I was born in London but grew up in the US. I visited my British grandparents many summers of my childhood and still have family there. As a mom of a multiracial child, who doesn’t much follow the royals, I’m thrilled that this new member of the British Royal family is biracial and multinational. But my family is an adoptive family. We did not come together the traditional way and don’t “match” the way some families do. My 6.5 year old is well aware of this, and yet struggles to understand the meaning of it all. To her, the word mother is a noun, to me it is a verb: it’s the things I do for her, with her, and the ways in which I love her that make me her mother, not biology.

This morning, my child questioned whether I am really her mom. It’s not the first time. Quietly, I asked, “Why? Did someone at school tell you I’m not? No? Because I didn’t carry you in my uterus?” She nodded. I tried to explain that pregnancy is only part of being a mom, that she has her first mom who carried her, and me…but I worry this may have only added to her confusion. I went about my work day, not giving it much more thought, but it is sometimes hard to shake the feelings of failure that resulted from years of infertility, assisted reproduction and recurrent miscarriages. It’s hard to explain that those experiences rendered me a shadow of my former self.

The loss of confidence resulting from not being able to carry out an ostensibly basic biological function crept into all other areas of my life. Some people pursue donor sperm or eggs in order to experience pregnancy and have a child who is blood related. Some use surrogates. This became less and less important to us, but may prove otherwise for our child, as she did not choose to be adopted any more than she chose to be born. For us, becoming parents via adoption was a triumph, ending years of excruciating disappointment, and the unrelenting limbo of wondering if we’d ever become parents. Choosing adoption meant we had to shift our mental focus away from pregnancy and biology and refocus on the task at hand: understanding the nuances of being a (transracial) adoptive family, caring for our child, and learning to be the best parents we could be for her (ongoing).

This evening as I perused social media, I saw pre-mother’s day posts calling on “all” moms to answer questions about their firstborn. The questions were: whether or not the Father was in the room. (I’m sure lesbian and single moms love that one), if labor was induced or not, medicated or “natural” (multiple meanings at best, shaming at worst), etc etc. Obviously these questions hold valid meaning for many moms. I can’t help but be reminded that I am not one of “those moms”. Perhaps I will have to create a version for us “non traditional” moms and try to get it to go viral. I think it’s needed. Along with increased awareness and sensitivity to “other mothers” and women struggling with infertility and pregnancy loss.

What I am trying to say is that family comes in many different forms. They are not all alike, not all one binary, not all 2-parent, matching or blood related. I wonder if there will ever be a royal family who adopts a child. Given the history of women being exiled, excommunicated or worse for failure to produce a royal heir, I somehow doubt it. Yet this latest royal baby does bring a breath of fresh air, thanks to his mother. I hope she also brings awareness to the fact that the maternal death rate for women of color (at least in the US) is still disproportionately higher than for white women. Those mothers are not getting the “royal treatment” they deserve during childbirth or after.

Mother’s day is hard for many women. Some are aching to become mothers, some have lost babies or children, or placed children for adoption. Some miss or are losing or have lost their mothers; or had complicated mothers or abusive mothers. Mother’s Day sends a false message that motherhood is the end all be all of womanhood. It is not. Our worth as women is not solely dependent on this function. (And, frankly, it is vastly undervalued, and unnoticed). That is not to say that I don’t admire women who have endured difficult pregnancies and or births. I do. But I also admire many women who have taken different paths and nurtured great dreams, projects and works into reality; and those who are juggling both family and career. This mother’s day, I celebrate Mother Earth, ALL women: Black, Brown, cis, Lgbqtia, non binary, ALL mothers, ALL career and “other minded” women, and all who are trying so diligently to become mothers. Cheers and hugs to us ALL.